The 10 Best Places for Fried Chicken in Iowa! 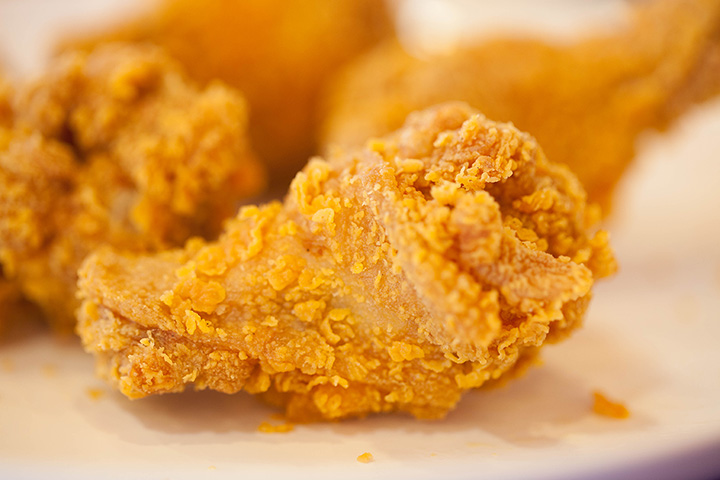 Split between a fried chicken menu and Mexican fare menu, you can grab some of the best fried chicken in the state at the Mt. Hamill Tap on Wednesday, Friday and Saturday nights. Fried fresh and crispy, the Mt. Hamill Tap in Donnellson has gained quite the reputation for their fried entrees, especially the chicken, and what really helps is the local ambiance and friendly service you receive every time you walk through the door.

Always fresh and made to order, whether you go for the fried chicken or fish at SugaPeach, you’re bound to bite into something you’ll love. Derived from the kitchen of Carol “Sweetiepie” Cater-Simmons, SugaPeach delivers not only big on the chicken and fish entrees, but to compliment the meal a whole list of sides and appetizers can also be found on the menu. Whether you are just looking to get a little snack to hold you over, or preferably a whole meal to remember, SugaPeach never fails to satisfy anyone’s appetite.

Fairly new to the Iowa City culinary scene, Pullman’s Diner has already cemented itself as a key Iowa City eating establishment, and much of that success can be attributed to Pullman’s wide variety of entrees and appetizers. Among the best of the best at Pullmans is there all-natural Iowa fried chicken which comes with house fermented hot sauce and local honey, plus a biscuit and farm greens. While Pullman’s fried chicken isn’t the only reason to visit this laid-back establishment, it does stand as nearly the best.

While the Latin King Restaurant in Des Moines is probably best known for their Italian fares including pollo, pesce and pasta, this family-owned establishment has also built quite the reputation for having some of the best fried chicken in the state. Found on the Family Style Dining Menu, and served alongside the Una Famiglia entree order which also includes Italian-inspired pork chops and mostaccioli, Latin King’s fried chicken, much like the rest of their offerings, is worth coming back for time and time again.

Serving as one of Iowa’s oldest eating establishments, Breitbach’s Country Dining has had plenty of time to perfect the ultimate fried chicken recipe. Made fresh from scratch, the fried chicken at Brietbach’s is orderable by the quarter-pound or half-pound, ensuring there is always enough to share, but not guaranteeing that you have to. The best way to enjoy Breitbach’s fried chicken is to grab a seat surrounded by family and friends and dig in together.

Even as a chain restaurant, Harold’s Chicken delivers some of the most consistent and great fried chicken found in five different states. For much of its history, Harold’s Chicken could not be found in Iowa, but as of recently, Harold’s has expanded into more than one Iowa location including Cedar Rapids, Iowa City and Waterloo. The traditional order at Harold’s comes with a quarter of half chicken (white or dark meat, or both), two pieces of white bread and a cup of coleslaw. Other items off the menu at Harold’s includes wings, gizzards and dumplings, giving you many reasons to come back for more.

While the Tavern in Valley Junction is nearly world famous for their thin-crust pizza, this aroma-filled eatery also serves up some of the best fried chicken in the state. Featuring broasted chicken, which provides for some of the juiciest fried chicken you'll ever bite into, the fried chicken at the Tavern can be ordered via a half-chicken, whole-chicken or three-piece meal. With so many things on the menu at the tavern alongside their broasted chicken, including some mouth-watering pizza and pasta options, the hardest part about visiting this iconic Valley Junction eatery is deciding what to order.

The Highlife Lounge and adjoining El Bait Shop in downtown Des Moines not only provide some of the tastiest food in the metro, they also have plenty of beverage options to wash it all down with. While you can’t go wrong with things like bacon-wrapped tater tots at the Highlife Lounge, or their house-specialty Beef Stroganoff, the broasted chicken will give you a good reason to visit every day of the week. Serving as some of the juiciest, finger-licking good fried chicken in Des Moines, the Highlife Lounge has everything you need for a memorable night eating out on the town.

Self-served and made fresh daily, John’s Grocery in Iowa City is a locally-owned corner grocery store with some of the best fried chicken in the state. What’s even better, this unique grocery store has one of the largest beer selections found in Iowa City, if not the entire state. Whether you are a looking for a great meal to go along with a unique brew, or you just happen to be in the northern downtown district of Iowa City, John’s Grocery is worth stopping into no matter the day of the week.